The Challenges of Growing Mint

By Backyard Life on August 14, 2017 in Gardening with 0 Comments 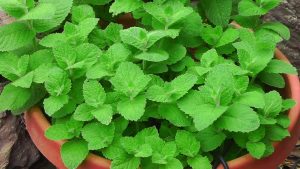 Here we cover of the challenges of growing mint.

A Short Introduction to Mint

To sum up a rather complicated situation, there is no consensus about the number of species belonging to the genus Mentha. In main, this is because some mints can crossbreed to produce natural hybrids, but human cultivation has also contributed much to their speciation over the centuries.

Even though most mints share enough characteristics to be cultivated using much the same set of methods, it is important for interested individuals to learn more about their cultivars of choice in case special accommodations are needed to see them thrive.

Here are some of the most common characteristics of mint and their relevance to individuals interested in growing them:

In short, cooler temperatures in colder climates can kill all but the hardiest cultivars, meaning that mints should be brought indoors before the onset of the coldest season.

Given the challenges to growing mint in winter, here are some of the most useful solutions:

Containers with bottoms are preferred, but bottomless containers are also acceptable so long as said containers measure at least 15 inches in length. Bear in mind that this option can be inconvenient if the local climate is cold enough that mint has to be moved indoors during winter, but should otherwise suffice throughout all four seasons.

Sure there are challenges of growing mint, but once mints have been planted, harvesting them for fresh herbs is as simple as snipping the leaves and stems. So long as even an inch of stem remains standing above the ground, the mint should continue growing to provide additional harvests time and time again. No doubt there are challenges of growing mint, but with a little bit of thought, it can be quite easy.

About the Author: Living Out The Back, was started as a way to share the best of what life has to offer outside your house. Its the backyard that so many people don't enjoy that we want to help you with. Its there for everyone to enjoy. More from this author.

This site uses Akismet to reduce spam. Learn how your comment data is processed.

Trending on Living Out The Back